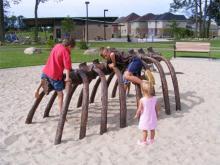 Peter May, a sculptor, began Research Casting International (RCI) in 1987, a museum technical services company that creates life-sized models of fossils. Having made molds of dinosaurs and other extinct mammals for museums all over the world, Peter and Matt Fair realized that these molds could be used with children. In 2009, Peter and Matt founded Exploration Playgrounds as an extension of RCI. Operating on the belief that, “Not every town has a museum, but every town has a playground,” Exploration Playgrounds creates playground dinosaur digs, archaeological sites, custom playgrounds, and dinosaur climbers.1

Headquartered in Trenton, Ontario, Canada, Exploration Playgrounds base their playground designs on actual fossils they have made molds for museum displays. A plaque next to the embedded bones of a playground dig identifies the individual bones and includes a map for locating them. There is also a short history of the skeleton, where it was found, and the museum that has the original bones on display.2

Exploration Playgrounds' archeological playground sites include Mayan ruins, Easter Island heads, and Stonehenge options. They also offer nine different dinosaur digs that range in size from a four feet in diameter fossil to a 35' by 13' T-Rex skeleton.3 These are partly buried to be uncovered by the children in their play.

Building on a steel framework and sculpting with fibre-reinforced epoxy, Exploration Playgrounds designs playgrounds with slides, swings, and climbers, such as the dinosaur rib climber and the T-Rex skull climber. They also offer climbing stones, fiberglass trees for climbing, and stand alone dinosaur footprints.

In their first year, among other projects, Exploration Playgrounds built a rock-themed area out of T-Rex and Triceratop Skulls for Disneyland. The following spring, in 2010, they created a volcano for Niagara Falls, and in November they partnered with L.A. County's Make a Wish Foundation.4