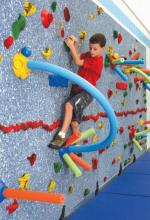 As part of the PlayCore family, Everlast Climbing Industries designs and manufactures indoor and outdoor climbing walls and handholds for all ages. They believe that “Climbing builds overall wellness, which consists of physical well-being such as strength, flexibility, and coordination integrated with emotional and intellectual characteristics such as problem solving, patience, perseverance, and courage.” In short, “climbing strengthens the body, challenges the mind and encourages the spirit.”1

Everlast Climbing became part of PlayCore, a manufacturer of play and recreational equipment in 2008. Tim remained General Manager and the company continued to design and innovate. As of 2012 they have been awarded 11 patents4 for such items as a double mounted hand hold, a transverse obstacle course, and a mat system that doubles as a wrap and lock system for unused walls.5

NatureRocks, outdoor climbing boulders and nature play pieces, were introduced in 2009, a StartFit line of fitness products was launched in 2010, and the Spectrum Aquatics line of commercial pool equipment was also added in 2010.

As they began to expand to active recreation beyond climbing walls in 2010, they renamed their division of PlayCore: EverActive Brands. As such they continue their mission of “inspiring, engaging, and enabling physical activity.”7