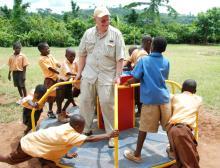 The nonprofit organization, Empower Playgrounds, Inc. (EPI), is providing electricity-generating playground equipment to villages in Ghana that are too remote to be on their nation's electricity grid. The school children gain a playground as well as safe, rechargeable LED lanterns to light their homes so they can do their homework. Additionally, the play equipment doubles as part of a hands-on science lab which brings science concepts into their daily lives.1

Ben Markham saw the need for light for students while serving a service mission in Ghana with his wife. As a chemical engineer2 and a retired Vice-President of Engineering with ExxonMobil Research and Engineering, Ben saw a way to solve both problems: the lack of play spaces and the lack of safe light sources for studying at night.3 After returning to Provo, Utah, he involved students and faculty at Brigham Young University in designing a system to convert children's kinetic energy in rotating a playground merry-go-round to charge a large AGM deep cycle battery, which in turn would recharge LED lanterns that students used in small study groups in their homes at night.4 With these plans, Ben formed Empower Playgrounds, Inc. in 2007.5

EPI's design was assisted in 2008 by Dave Smith's SuReAl Group who provided the electronic components to convert the power to direct current and manage charging of the storage battery and the LED lanterns.6 In Accra, Ghana, Kweku Anno of Anno Engineering took the resulting design and adjusted it to incorporate local materials in the manufacturing process.7 From the beginning, Anno Engineering manufactured and installed the merry-go-rounds that were placed in Ghana. With the assistance of Ghana's Ministry of Education, EPI merry-go-rounds were installed in five villages which had strong school systems and community unity to test and develop the system.8

In Ghana's rural villages the students use the after school daytime hours to work on the farm and then gathered around a kerosene lamp or dim candle, if available, to do their school assignments. Often there would only be enough light for one child to read to the others.9 Kerosene was expensive for the families, created health problems, and posed potential fire hazards.10

With the EPI system, students are grouped into study groups with a “lantern leader” in charge of the lantern taken home for studying. One local educator noted that “Kids are going through materials faster, understanding concepts they previously could not, and asking for more.”11

When Energizer Battery, Inc. realized in 2009 that Empower Playgrounds was modifying LED camping lanterns to work with their playground electricity generating system, Energizer became a sponsor of EPI and developed a smart LED lantern that would match EPI's system without modification.12 These smart lanterns will give light for about 40 hours before needing to be recharged.

Also in 2009, Matt Miller, the CEO of Playworld Systems heard of EPI's electricity-generating merry-go-rounds and approached Ben about partnering together. Playworld, a family-owned commercial playground manufacturer, applied state-of-the-art materials and manufacturing know how to the designs from Anno Engineering.13 The “whirls” are now manufactured by Playworld Systems and assembled and installed by Anno Engineering.

The partnership with Playworld has expanded EPI's reach to more villages “at a much faster rate than we would have been able to on our own.”14 EPI has also designed and installed an electricity generating swing and plans on developing an electric generating zip line.15

The new whirl design has see-through panels so the children can see the gearbox and generators they are moving to create the electricity.16 This facilitates the hands-on science lessons that are a third part of EPI's mission. To expand on this science curriculum, EPI has partnered with Loose in the Lab, who provides a full science module and science equipment, such as magnets, thermometers, wires, compasses, rulers, solar cells, and solar cookers.17 A solar panel is included in the electricity-generating playground equipment and doubles as an educational tool.18

In support of EPI's three-fold mission in Ghana, Matt joins them in declaring, “We believe play and education are both vital to the human experience, regardless of geography, age or ability.”19