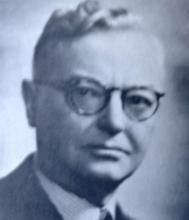 An early playground and recreation leader, George Dickie was influential on the city, state, and national levels. He began as a part time playground director and rose over the next four decades to be the executive secretary of the Federal Inter-Agency Committee on Recreation.

At the age of 22, George earned his law degree from the University of California in 1906. While attending school he was a part time playground director for a church in Alameda, California. After graduating he supervised a boys' club in Oakland, California as he began building a business career. During the summers of 1907 and 1908 he was hired by the Parks and Playground Committee of the Oakland Club, a progressive woman's organization, to be a playground instructor.

The Oakland Club succeeded in having a recreation committee appointed for the city of Oakland in 1908 and George was named the supervisor. Two years later, he continued as supervisor under the new Board of Playground Directors organization within Oakland city. His abilities as an administrator, his statesmanlike leadership, and his diplomacy were valuable in forging a progressive plan with the Superintendent of Schools.

In 1914, both the School Board and the Playground Board agreed that George would oversee the supervision of school playgrounds when school was not in session and that he would therefore also be the director of the school playgrounds. He eventually became the Director of Physical Education in the schools. This landmark cooperation between the schools and the city that led to the establishment of one leader over both entities' recreation programs was an influential pattern for other Californian cities.

Over the next three years, George led a department staff of 200 and established a quality recreation program that included “hobby clubs, holiday celebrations, a wide range of crafts, camping, festivals, and a great variety of sports, including boating.” Under his leadership the emphasis was more on involving all youth rather than on the competition of a select few. This was seen in their mottos: “Every Boy in a Game” and “Sports for Sports' Sake.”1

During this time, George taught recreation courses at the University of California and thus became one of the first recreation workers to teach at a university. In 1915 he also wrote a series of three articles for the Playground and Recreation Association of America's journal Recreation entitled “Aids in the Practical Conduct of Playgrounds.”2 These articles and his exemplary leadership and quality recreation program in Oakland brought George national recognition as well.

Beginning in 1917 George applied his talents in the Playground and Recreation Association of America (PRAA) located in New York City, New York. As chairman of the National Committee on Games, he assisted with the 1917 report of educational games for schools which included a listing of indoor and outdoor activities for boys and girls.

During World War I when the PRAA was asked to oversee recreational opportunities for the military through the War Camp Community Service program, George was the manager until the war ended. After the war, he continued as Manager of Community Service that continued to provide recreation programs. He also advised the Mayor of New York City concerning parks and recreation, presided over the recreation executives sessions at the National Recreation Congress, promoted the reservation of playground areas in future real estate developments, chaired the Committee on Recreation in Industry for President Coolidge's Outdoor Recreation Conference, and was involved with the 1930 White House Conference on Child Health and Protection. He was an able liaison between other national groups, such as the American Legion and the American Institute of Park Executives, and the PRAA.

The success of the recreation programs during and after the war led to the increased need for trained recreation executives. In 1925 the PRAA established the graduate National Recreation School with George as the first director. With his practical experience on the playgrounds as well as his abilities in local and national leadership, George effectively shaped the curriculum and field experience of the graduates for the school's first five years. In 1930 he resigned from the school and the association.

After an absence of 17 years, George returned to the national recreation field in 1947 when he was appointed the executive secretary for the newly formed Federal Inter-Agency Committee, a part of the Department of the Interior. This agency was a clearinghouse for information between the 15 different federal agencies that were including recreation in their programs, a sounding board for resolving common problems, and a coordinated effort to resolve “unmet needs” effectively. Additionally the Inter-Agency Committee defined the role and responsibility of the federal government in recreation and encouraged similar inter-agency committees on the state level.

Part of his responsibilities included directing publications which clarified the role and policies of the federal government in recreation, including “The Role of the Federal Government in the Field of Recreation,” “Fees and Charges for Federal Recreation Facilities,” and “The Conservation and Development of Outdoor Recreation Resources.” Over the 13 years of his involvement until George retired in 1960, he provided apt leadership and diplomacy through his “caution and good judgment in making decisions” and his “genial, tolerant, and tactful personality.”3

In recognition of George's abilities and their confidence in him, the Board of Directors of the National Recreation Association, formerly the PRAA, appointed him as the Acting Manager of the Association for the eight months after Howard Braucher's death in 1949 and before Joseph Prendergast became the new director. This appointment reflected the “high regard” and trust that recreation workers in American felt toward George Dickie.