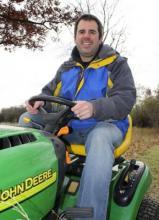 The Detroit Mower Gang was formed to rescue abandoned parks in the city of Detroit, Michigan. Because of the economic downturn that greatly affected Detroit in 2009, city government was strapped to sufficiently maintain many of the public city parks. Rather than allow them to be overrun with weeds and become unusable for children, Tom Nardone decided to do something about it, one park at a time.1

Rounding up a bunch of “do-gooders” in August of 2010, Tom invited people to join him at an abandoned park with lawnmowers, trimmers, and other landscaping tools to clean up areas that were overrun with weeds and debris. Rather than being a typical park cleanup, their efforts became known as Mower Gang events. Described as one part cleanup effort and one part biker rally, the members of the Mower Gang have fun while working.2

One of the first and most successful events held by the Detroit Mower Gang was cleaning up the old abandoned Dorais Velodrome, a banked racing track, which had been built in the late 1960s. The Dorais Velodrome is now being used for a racing series called Thunderdrome, which is for mopeds, pit bikes, scooters, minibikes, geared road bikes, fixed gear bikes, mountain bikes, and go-karts.3

Other events have included making a maze and a labyrinth in a large abandoned field and holding a road rally and scavenger hunt to survey 89 different parks for future endeavors. Finding many playgrounds still have the swingsets in place, but the swings removed, the Detroit Mower Gang is promoting the need to replace the swings to provide children play equipment they can enjoy.4

Membership to the Detroit Mower Gang is free and open to anyone who is interested in helping restore the use of abandoned city parks.5