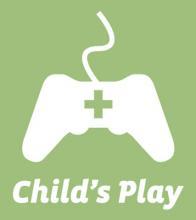 Child's Play is a “gamer-run” nonprofit organization which coordinates game and toy donations for children’s hospitals worldwide. By providing videogame consoles, videogames, videos, coloring books, cartoons, books, and arts and crafts supplies, the organization seeks to ameliorate the stress of long-term hospitalization for the children and their families.1 As a side issue, Child’s Play is also hoping to educate the public that gamers are not antisocial “ticking time bombs just waiting to go off.”2

Gamers Mike “Gabe” Krahulik and Jerry “Tycho” Holkins, authors for the game-based webcomic Penny Arcade, formed Child's Play in 2003 as a way to bring toys to sick children at the Children's Hospital and Regional Medical Center in Seattle, Washington. With the backing of Penny Arcade's three million reader-base, they were able to raise nearly $250,000 in toys and cash.3

In their second year, Child's Play expanded to include children's hospitals in San Diego and Oakland, California; Houston, Texas; and Washington, D.C. Besides the $310,000 that was raised, Child's Play gained 40 corporate sponsors, such as Nintendo, Midway Games, THQ, and Cerulean Studios. Two years later, in 2006, Child's Play surpassed one million dollars in donations.4 In 2011, Child's Play broke the $10 million mark in lifetime contributions with a total of $3.5 million in donations in 2011 alone. 9 Jan. 2012." href="#footnote5_bmwiufp">5

Each year since the beginning, Child's Play has added new children's hospitals to their list of recipients and raised money through donations, auctions, voting contests, tournaments, or downloadable music. Though they collect toys all year round, their active season runs from October through December and focuses around the Christmas holidays.

Child's Play volunteers assist each hospital to register a wish list on Amazon.com and the hospital is then added to the interactive world map on the Child's Play website. Donors choose a hospital and follow the link to their wish list. They buy an item from the list, which is then shipped directly from Amazon to the hospital.6

Other ways to support Child's Play is to sell used items on eBay and donate the proceeds through a MissionFish account, donate money directly, organize a fundraiser, or participate in Child's Play contests, sales, and auctions.7 A calendar of these events is on the Child's Play website.

As one mother said, “Games and toys are important to children and their development, but they are truly essential to children fighting for their lives.”8 This echoes the Child's Play mission to “improve the lives of children in hospitals around the world through the kindness and generosity of the video game industry and the power of play.”9