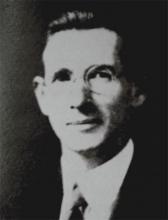 George D. Butler was the National Recreation Association's Director of Research for forty-three years and the author of several recreation books, including his favorite project Pioneers in Public Recreation. Joining the movement in 1919, George himself became known as “a pathfinder, a groundbreaker, and a pioneer” who “laid the foundation” of an effective service infrastructure within the emerging recreation field.1

Born in 1894 into a working class family in Seymour, Connecticut, George earned an economics degree from nearby Yale University where the famous William Graham Sumner had been teaching economics and establishing sociology as a science. Graduating in 1916, during World War I, he enlisted as a clerk and translator for the United States Ambulance Service and was stationed with the French Army. He was awarded one of France's highest honors, the Croix de Guerre Medallion, for his acts of “courage and endurance.”2

After the war ended, George toured Germany, England, and Wales before arriving in New York City in 1919. He then had to choose between a position at a bank, the Guarantee Trust Company, and the National Recreation Association, then known as the Playground and Recreation Association of America (PRAA). While he initially chose the PRAA, he wavered when the bank increased their offer.3 Repenting of losing sight of “his calling” in social service, George signed on with the PRAA as a probationary employee. Within two month he was noticed by the organization's executive secretary, Howard S. Braucher, given a raise, and named the Director of Research.

Part of George's new duties involved establishing and leading the Consultation and Correspondence Bureau, which dispensed information and responded to questions. As he worked to further establish recreation, he began with clearly stating, “the importance of playgrounds for the healthy upbringing of children” and the necessity of research to guide the emerging leisure field.4 Besides teaching at the National Recreation School, he conducted national studies of municipal parks for the United States Department of Labor (1930), the National Park Service (1935), and the American Institute of Park Executives (1940), and directed a series of community recreation surveys for the National Recreation Association (NRA).5

As an author, George assisted to establish playground design and open space standards through articles in Recreation, NRA's journal, and through his books: Playgrounds, Their Administration And Operation (1936), Introduction to Community Recreation (1940), and Recreation Areas: Their Design and Equipment (1947).6 He believed in the healing powers of recreation and felt that “the function of playground administration is to bring to reality the limitless possibilities which the playground affords for fun and good citizenship.”7

In his retirement George wrote Pioneers in Public Recreation (1965), a compilation of concise biographies of the recreation movement pioneers that served before World War I. George felt a “sense of dedication” to remember and honor these pioneers, many of whom he personally knew and with whom he had worked. He felt that the movement owed “its existence and growth primarily to the imagination, foresight, convictions, and actions of individuals who recognized recreation as a basic need and proceeded to do something about providing it.”8

When the Academy of Leisure Sciences was being formed in 1980, they chose 30 Founding Fellows out of 70 candidates. George was one of these Founding Fellows chosen for his “exceptional scholarly and intellectual contributions to the study of leisure.”9 Five years later, in 1985, George died at the age of 91 years. Ten years later, in October 1995, he was inducted into the Robert W. Crawford Recreation and Park Hall of Fame, and in 2004 the Academy of Leisure Sciences began sponsoring the annual George Butler Lecture given at the opening session of the Leisure Research Symposium of the National Recreation and Park Association Congress.10