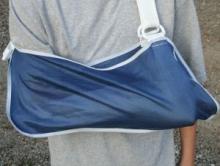 Bone fracture injuries account for about two-thirds of all injuries on playgrounds. Nearly all of these fractures (90%) involve upper limbs and come from falls from monkey bars or climbing frames.1 Woltzman also found that injuries in children ages 1-4 years old were more likely to involve bone fractures. Lillis and Jaffe found that most hospitalizations due to playground injuries were from fractures of upper extremities. They found that older children’s fractures were mainly from climbing apparatus, while younger children were generally injured on slides.2

A study by Loder et al collaborated these findings with the additional observation that impact absorbing surfaces reduced head injuries, but increased long bone fractures, bruises, and sprains.3 Interestingly, Rubie-Davis and Townsend, in a study in New Zealand, found that 58% of the fractures came from falls from 59” or less, with 10 of those coming from falling 39” or less. Falls from 60-79” accounted for 33% of fractures and only 9% of fractures came from falls from over 79”.4