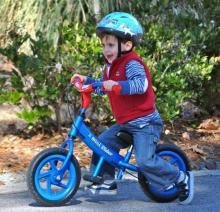 A balance bike is a training bicycle that has no pedals, gears, or chains. It offers an easy transition from walking to riding, for young children especially. The bike is low to the ground and children sit with their feet touching the ground and propelling themselves forward without help from others. This allows children to develop their skill in balancing and steering the bike before adding the need to accomplish the pedal action required for regular bicycles.1

The history of the invention of the bicycle is most generally credited to a walking machine built in 1817 by Baron von Drais as a means to get around the royal gardens faster. It was called a Draisienne or hobby horse, and it had two same size in-line wheels with the front wheel steerable. Mounted on a wooden frame, the rider would straddle the device and walk in a gliding motion to propel himself forward. The popularity of the glider was short lived, because a smooth well-maintained pathway was required. Pedals were applied directly to the front wheel by the 1860s, and chain, sprocket, and gear improvements were added to bicycle designs in the 1890s.2

Today’s balance bicycles are credited to have been introduced by Rolf Mertens, a German woodworker, whose original design was made of wood. He branded his balance bikes as LIKEaBIKE, and began manufacturing them in 1997 in Roetgen, Germany. The training bike’s popularity spread throughout Europe quickly, and by the early 2000s similar bike designs were being manufactured by other companies in Europe, the United States, and China.3

Balance bikes are often known as running bikes, pre-bikes, and push bikes. There are many different designs and preferences offered on the market today, including metal bikes, wooden bikes, bikes with hand brakes, and footrests. They are lightweight, usually under 10 pounds, and are low to the ground to accommodate children as young as 2 years of age.

With no pedals included in the design, children can learn to maneuver the balance bike at their own pace without the pressure of learning to balance and pedal at the same time as on a regular bicycle. Children sit on the balance bike and transition from sitting and walking, to sitting and running, and finally to picking their feet off the ground and gliding. The skills of balance, steering, and coordination can be mastered quickly, and the confidence gained by starting on a balance bike can lead to a child learning to ride a pedal bike as young as the age of 4 without the use of training wheels.4