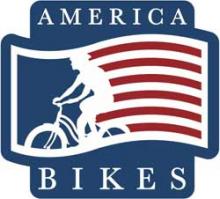 America Bikes is a coalition of seven biking organizations united to advocate for recognition of bicycling needs in the United States. The America Bikes Board of Directors includes a leader from each of the member organizations: the Adventure Cycling Association, the Alliance for Biking & Walking, the Association of Pedestrian and Bicycle Professionals, Bikes Belong Coalition, the International Mountain Bicycling Association, the League of American Bicyclists, and the National Center for Bicycling & Walking.1

Through policies that promote biking and walking and with funding to enact the policies, America Bikes seeks to double the percentage of trips made by walking or bicycling. Currently 40% of all trips made in America are two miles long or less, with only 10% of the trips being made by bicycling or walking. By shifting from short car trips to bicycling or walking 20% of the time, America Bikes believes there will be “tens of billions of dollars per year in economic, health, tourism, energy, environmental, safety, and congestion-relief benefits.”2

America Bikes focuses on the Federal Transportation Bill and other federal policy that affect bicycling and walking.3 To accomplish their goals, America Bikes is asking the U.S. Congress:

America Bikes hopes to create an entity within the Department of Transportation to administer bicycling and walking programs and to coordinate these programs and policies with other Federal agencies. They are seeking to prioritize transportation projects, such as bicycling and walking, which will reduce CO2 emissions and thereby support the United States Climate Policy. And they want to establish an Active Transportation InnoVative and Experimental Design (ACTIVE) program to encourage the development of programs for increasing non-motorized transportation options.5

As a nonprofit, they advocate on the federal level and work with communities on the local level. On the state level, America Bikes also works as an advocate for a Bicycle Friendly America. The Bicycle Friendly State Program, initiated in 2008, ranks all the states according to how actively they support bicycling according to a 75 item questionnaire. The top ranked states promote bicycling through legislation, programs, and policies; create new places to ride safely; and educate and encourage people to bike for recreation and transportation.6